Battle of the Books

The Battle of the Books competition showcases the academic value of reading and reading comprehension...The Library System's support has been invaluable in helping our team reach its full potential and be a competitive force. - Kathleen Tomaino, Booker T. Washington Middle School

Battle of the Books is an annual event hosted by the Newport News Public Library System in collaboration with the Williamsburg Regional Library. Area school teams compete by answering questions on books they have read. The program is open to students grades 4 through 8. Students compete in a city and then a regional competition. 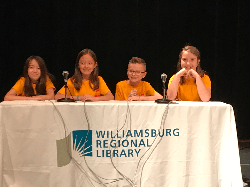 For more than 25 years, teams of elementary and middle school students from Newport News have engaged in a battle of reading, comprehension, and memorization. Annually, these teams compete on the city-wide level and go on to represent Newport News in a Regional Battle of the Books.

The competing elementary schools this year were:

On Saturday, March 16, the team from General Stanford Elementary represented Newport News on the elementary level and Warwick River Christian School represented on the middle school level in the Regional Battle of the Books. General Stanford competed against teams from Hampton, Poquoson, Williamsburg and York County and ultimately won the title! This represents the third consecutive year that a school from Newport News has claimed the winning spot in the regionals on the elementary level. Great job to all who participated!